skip to main | skip to sidebar

No time to feel guilty! 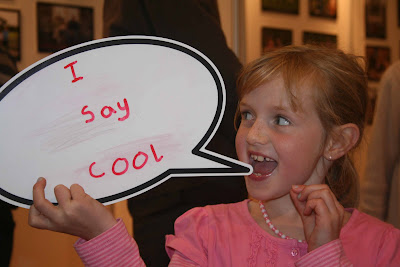 I had intended to regularly blog progress on the play -a discipline that has evaded me so far. To say I have been busy and distracted seem in this day and age to be an almost hackneyed excuse -Every ones busy! -hopefully too busy to notice.....but before it's too late I have un folding news the story so far is this:The play now has a title (it's 5th) as it really is a sort of hybrid mongrel of a thing that has evolved more than my original concept of simply writing a story with some singing parts. Where has evolved after many ideas have been thrown into the pot - and nearly all of them incorporated (sorry Guy I just can't get my head around "clap" & "boo" signs for the audience....) anyway the title is "ive had another idea..and other stories" as this has been a running theme and catch phrase from the very beginning of POOT - and reflects the creative process that has roller coasted us to this moment in time.
Using some of the "folk-lore" picked up during the course of my photography sessions, including the story of "The Boar in the Barrow" - and taking references from babies born in lay-by's to what happens when someone telephones a house and asks to speak to George - when every generation that lives there has someone called George in it....there are references to raking dogs and illicit stills, old men of the woods and principally The Muckle Spate poem which has given me a running theme.

What I had not anticipated was how central the chorus would become! - The first plan was to take a series of stories and string them together with a few songs -thus allowing us to rehearse the little scenes separately and prevent lots of folk from having to hang around. However, following the open casting we really did grow like topsy -and now have a marvellous chorus of 47 ranging in age from 5 to...well I couldn't possibly say - but a few energetic retired thesps! - a great many more bodies that we imagined -so now linking the musical numbers are a cast of around 25 spoken parts - and in ADDITION to that we have one scene with 60 children!! -actually now I think of it - the reason I dont write all this down....makes me want to go and lie down in a darkened room. Thankfully supporting all this activity and chattering children is a supporting cast of another 40 or so good people who have pledged to help in many ways from sewing costumes, knitting fish, building and painting scenery and generally making things run smoothly. They range from the seasoned campaigners to the green but keen to help, the important thing is actually finding jobs for everyone! - harder than it sounds with such a lot to do - but my memory being almost full to bursting - forgive me if you approached me in the co-op and I made you a rash promise to call you if I needed you!

We have presented the cast with some well known songs....but we've changed lots of the words! -and some well know songs that I now realise are harder than they would appear - since when I tried them out - (belting them out in the sealed and secure privacy of my car....can't you just imagine it!)transfer that to 50 voices - of a song that is meant for a solo and I'm giving the Jolly band another headache! - No point in worrying about it - the main thing is that hopefully everyone is having fun. We have worked out that the hall is not big enough to "store" 60 excited children and so our lovely new head teacher has offered to open up the school for after the performances....the next thought is - with so many folk already performing - have we left enough folk to make up the audience?
Posted by Mel at 01:16 No comments: